Home > About Us > History

During the Second World War the house remained standing while surrounding buildings were raised to the ground during the London Blitz. The Ciba/Novartis Foundation moved into 41 Portland Place in 1947; and for over 50 years hosted prestigious scientific events attended by some of the greatest medical scientists of the last century.

In October 2010, after a £5M refurbishment, the building started a new chapter in its history as the home of the Academy of Medical Sciences. Profits generated through venue hire of 41 Portland Place are used to fund activities run by the Academy to ensure research improves health.

Before the Second World War

Designed by James Adam in 1773, 41 Portland Place was originally built as a private home for The Honourable Thomas Gage.  Gage was a British General, best known for his many years of service in North America, including his role as military commander in the early days of the American War of Independence.  Ironic, considering he was married to Margaret Kemble Gage who was born in New Brunswick, New Jersey.  There is speculation that she was a spy for the patriots due to her familial ties to America.  However her brother, Stephen Kemble, was a Lieutenant-Colonel in the British Army during the Revolution.

Thomas Gage and his wife married in 1758 and together they had 7 children.

From 1763 to 1775 he served as Commander-in-Chief of the British forces in North America, overseeing the British response to the 1763 Pontiac’s Rebellion.  In 1774 he was also appointed Military Governor of the province of Massachusetts Bay, with instructions to implement the Intolerable Acts, punishing Massachusetts for the Boston Tea Party.  His attempts to seize military stores from the patriot militias in April 1775 sparked the Battles of Lexington and Concord, beginning the American War of Independence. After the Pyrrhic victory in the June Battle of Bunker Hill, he was replaced by General William Howe in October 1775 and returned to Britain.

The next occupant of the building in 1792 was a politician followed by several other persons with political or military careers.

41 Portland Place’s last inhabitant was the Dowager Lady Alington who passed away in 1939.  After her death, the house was left empty for two years, but remained standing while surrounding buildings received bomb damage during the London Blitz.  During these two years the house was acquired for military use, and was occupied by Balfour Services Club, a Jewish Social Centre and also by the forces of the United Nations.

The building was renumbered several times as new houses were added on Portland Place.  Later the street acquired its present numbering system with even numbers on the east site and odd numbers on the west.

After the Second World War

In the years following World War II, the area surrounding Portland Place changed dramatically and re-emerged as a centre of medical practice.  The Medical Society of London and the Royal Society of Medicine were two societies to take up premises nearby and Harley Street became world famous as a location for private healthcare.  The Ciba Foundation, later known as the Novartis Foundation, moved into 41 Portland Place in 1947; and for over 50 years the Foundation hosted prestigious scientific events, meetings and symposia attended by some of the greatest medical scientists of the last century.

During the late 1950’s and early 1960’s the building suffered somewhat dramatically as a result of floods and fire.  One of the floods that occurred during this time was actually a result of one of the guests (an acclaimed Professor) forgetting to turn off his running bath.  As a result, the housekeeper’s quarters were completely ruined which meant all the paperwork related to previous and future bookings was completely destroyed.

There was also an incident in which one of the guests was found in the maid’s bathroom.  There was speculation as to what he was doing there, however unfortunately not recorded. 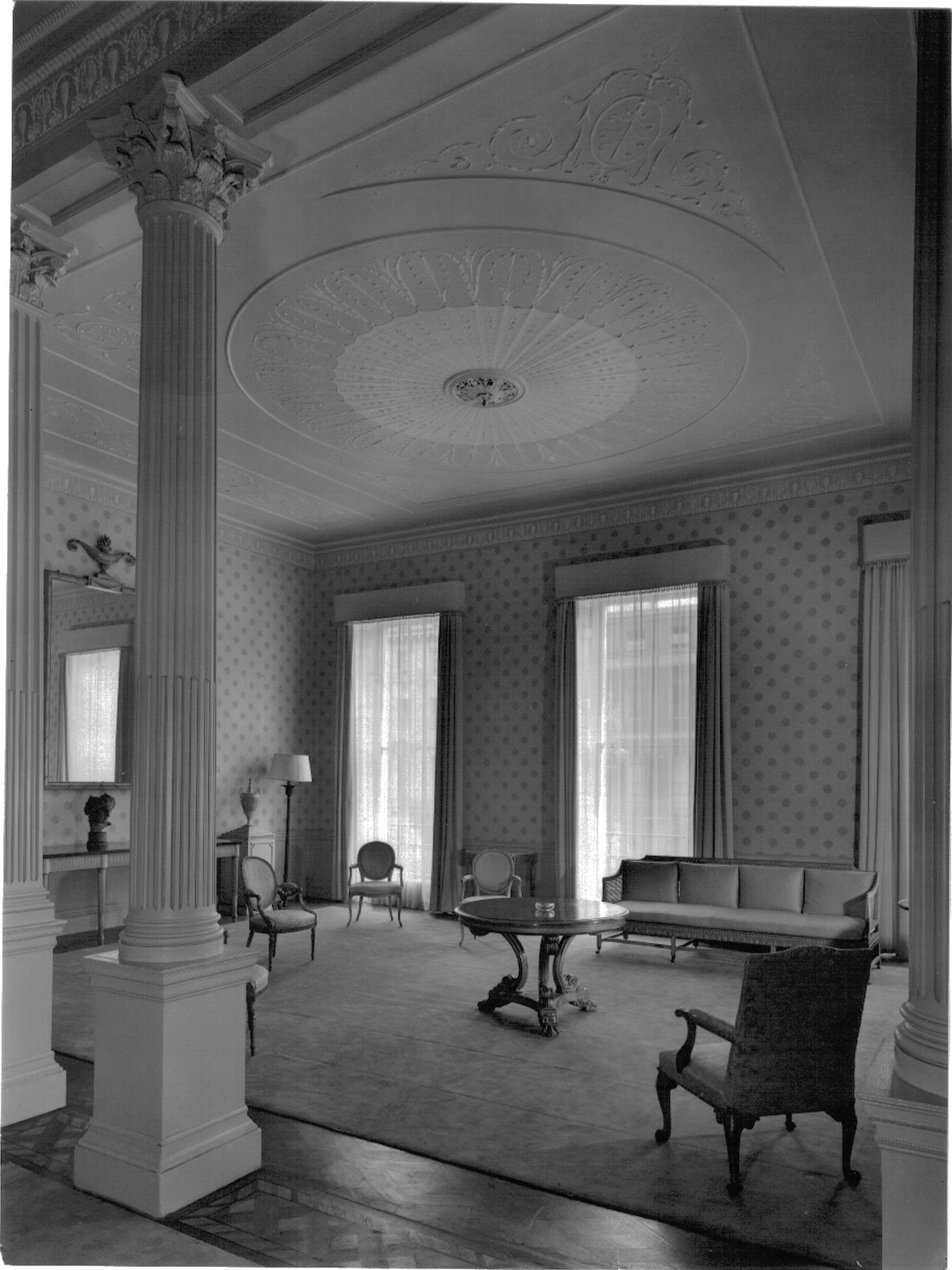 The Academy of Medical Sciences

The Novartis Foundation closed in 2008, following the Trustees’ decision to merge with the Academy of Medical Sciences.  After taking over the lease on 41 Portland Place, the Academy embarked on a £5 million redevelopment programme to create a modern headquarters and a conference and events venue under the design of award-winning architects Burrell, Foley & Fischer.  The building opened in October 2010 and started a new chapter in its history as the home of the Academy of Medical Sciences.

“In the early 19th century Portland Place was incorporated into the royal route, Carlton House to Regent’s Park, for the Prince Regent.”

HISTORY ON THE STREET

In 1948, the building next door was bombed and eventually demolished and rebuilt.  The building now sports bricks and architecture significantly different to the other buildings on Portland Place.

The Langham (1 Portland Place)
In 1865 the Langham opened as London’s first Grand Hotel.  The likes of Oscar Wilde and Algernon Swinburne (later Edward VII) were frequent guests at the hotel in its early years.  The section between Portland Place and Cleveland Street was a red light district until the end of the 19th century to which many of these socialites paid visits.

The building at 1 Portland Place was also damaged by bombs during 1940 and 1941. It was purchased by the BBC and then acquired by Ladbrokes and recently restored to its former imposing, Victorian glory.  In 1991 it reopened as the Langham Hilton.

33 Portland Place (two doors down towards Oxford Circus)
Occupied by Edward Davenport, this is where he and his celebrity friends host some of the most glamorous and exclusive parties in London.  33 Portland Place was the location for Amy Winehouse’s ‘Rehab’ video and it was also one of the locations for the film ‘The King’s Speech’

BBC
The British Broadcasting Corporation made Broadcasting House their base in 1932, and they still remain there to this day.